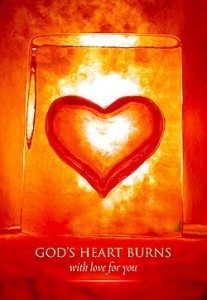 Some time ago a Facebook friend posted the comment that “Sin is not just breaking God laws; it is breaking His heart.”

Another Facebook friend replied that “His heart is not broken. He always sees you as innocent.”

I am writing to defend the original statement. Now, I cannot say to an absolute certainty whether His heart is broken or not, but it makes much more sense to say that it is possible than it does to say that it is impossible.

God is love. Without love there is no heartbreak. However, where love exists, the potential for heartache also exists. Because God is the full and complete embodiment of all that love is, it follows that the greatest potential for heartache lies within His own heart. There should be no argument up to this point, so let us continue to reason together.

We need to come to a realization that sin is something more than breaking a law. It is a missing of the mark of the righteousness that God desires to see in us. He wants to see it in us because we are His ultimate creation, designed in His own image. We need to understand that sin is a power working in us and against us. Because of Adam’s disobedience, the power of sin came upon him and has been imputed to us from generation to generation as part and parcel of our nature. No one is righteous in his or her natural state. We are born with the sin nature and it’s not long before it begins to exercise control over us, or should I say before we begin to subject ourselves willingly to it and we actively become sinners.

In the same manner, the only way we can become righteous enough to enter His presence is by imputation, and that is available only from God. In the Old Testament, forgiveness was given in response to the offering of sacrifices, none of which were, in and of themselves, capable of imputing actual or eternal righteousness. While the sacrifices of the Old Testament were efficacious to the point that they were, one might describe that as symbolically imputed righteousness. The sacrifices had no real redemptive effect in and of themselves, but they were recognized by God as being effective. The sacrifices were reminders of our offenses against God Almighty and that blood needed to be shed to cover our sinning.

God’s plan was always to send His Son, Jesus Christ, clothed in human flesh, to be tested in all points like as we are, but to endure the temptations of the flesh without disobedience to the Father or yielding to the insatiable hunger of sin for domination. Isaiah foresaw Him as despised and forsaken, a Man of Sorrows, and acquainted with grief. When Christ hung on Calvary’s cross, His was the one and only, perfect and eternal sacrifice that could ultimately satisfy the Father’s righteousness. And on the basis of Christ’s sacrifice, the Father declares righteous all who believe in Christ’s death and resurrection as the only Way to the Father.

Having said all that, I want to point to the fact that, when men and women had become so sinful that the Lord prepared a flood to cleanse the earth of sin, it was because He had “grieved” that His highest creation, the one He created so that He could have fellowship and share Himself, His goodness, and His love, had turned away from Him, forsaken Him, ignored Him, and rejected Him.

Have you ever felt grief? When we feel grief, it is usually connected to the loss of something or someone that we have loved. It hurts. It is painful. And it is deep. If you hear that the dog of a friend in a distant state has died, you would probably feel some empathy or sympathy. But if your dog were to die, you would grieve. Or, as we sometimes say, your heart would be broken, because you loved your dog.

Finally, I am prompted to remind myself and whomever reads this that the New Testament writer exhorts us not to grieve the Holy Spirit. The Greek word for grieve describes a deep, torturous pain held inside the one who is hurting. The Holy Spirit, fully God, loves us deeply, lives within us, and empowers us to understand Scripture and to walk in the way of the Father. So Scripture tells us that it is possible to cause God, the Holy Spirit, heartache. And, by the way, Paul wrote that instruction to believers – born again children of God.
Sin has always grieved the heart of God. It always will. And, apparently, even we, who have partaken of His divine gift and possess His imputed righteousness, can cause His heart to break when we choose to submit to the dominion of sin.

I don’t know about you, but I am resolved not to cause my Heavenly Father, His Son, or His Holy Spirit, any grief or broken-heartedness again. He wants me to love Him and I do. And because I love Him, I will obey Him. I simple cannot bear to break His heart by the things I do.